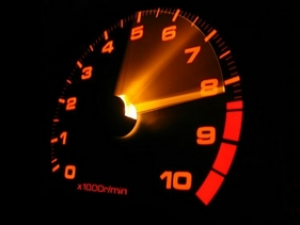 Are you familiar with the concept of the “redline“? It refers to the maximum engine speed, usually measured by the RPM (revolutions per minute), at which an engine can be operated without causing damage. Human beings have that redline too, but it varies from individual to individual, and it has a lot to do with your current level of health and fitness and your ability to push yourself to extreme levels of discomfort. Learning where your personal redline is and using that to your advantage during your training will make all the difference in your progress. I discovered that and you will too.

My guess is that you have experienced taking your body beyond its normal physical redline at least once in your life. Some people do it to themselves. They are capable of pushing themselves very, very hard; often to the point of physical failure and collapse (this isn’t always a good thing, which I will explain later). But, most people don’t like to do that, which makes sense as a creature that needs to survive. Think about predators, like the cheetah. Watch a show on Animal Planet and you’ll see that cheetahs spend most of their time resting, conserving energy, and preparing for the burst of energy they will need to successfully bring down prey in just a few seconds. They can only maintain their top speed of 100-120 KPH for about 500 meters. 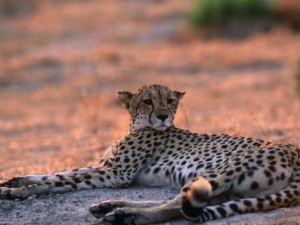 It doesn’t make any sense to needlessly waste energy when you don’t know when your next meal will be, or when you may need to run at any moment to escape another predator. So, since we are animals ourselves, we are built to be smart about conserving our energy, even though our world has drastically changed. Most of us don’t have to worry about catching our next “meal”. We don’t have to worry about sprinting away and jumping up into a tree to escape a predator. Thus we now have a difficult time tapping into that primal burst of redline power. But, I bet that you tapped into it once or twice as a child. I know that I did on at least two occasions (and probably more). 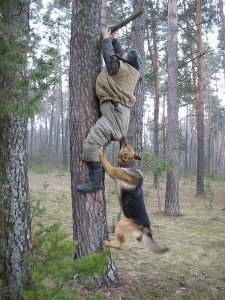 One time that I recall was when I was trying to escape a big dog that was chasing me. I put on a burst of speed and catapulted myself up onto a tree branch that I had trouble getting down from later when the coast was clear. There was no way that I would have made that jump under normal circumstances. But, the fear of that dog catching me pushed me right past my redline and up into that tree.

On another occasion I remember walking home from school and running into a group of bullies. The immediately gave chase with promises to beat the tar out of me. Again, I ran with a speed that I had never achieved before. Short bursts of redline power that certainly could never be sustained for very long, but lasted long enough for them to give up the chase.

You can also achieve this ability to go beyond your normal redline under more positive conditions too. Typically, this is experienced in a competitive setting where you have a crowd cheering you on, teammates encouraging you to give a little more, or simply knowing that someone who matters is watching you. I’ve found that this often happens in my CrossFit box and it can be a good thing. I push myself harder and do just a little more than I would normally have done on my own. It seems like every day I will be in the middle of a WOD (workout of the day), finishing round 3 of 5, and that little voice in my head says; “This sucks! It wouldn’t be the worst thing if you only did 3 rounds today. You have to get to work. It’s ok to hit the shower early. Etc., etc.”. But, when my WOD partner shouts some words of encouragement and I see the other athletes pushing on, then I dig deep and make myself grind through it. 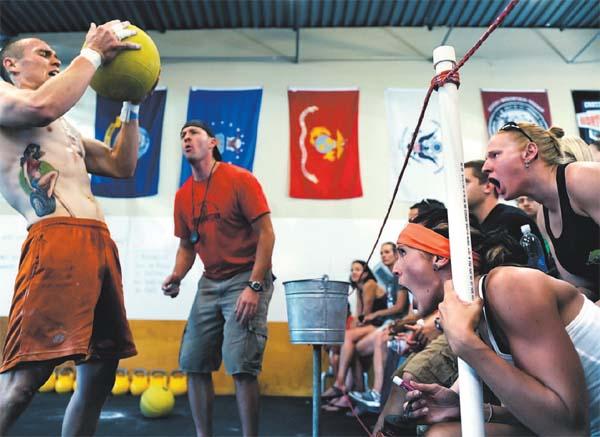 However, you can’t always rely on others to help you find that redline. Sometimes you train alone. Sometimes the encouragement just isn’t there. Even if it is, you really do need to learn how to listen to your body, how to recognize those internal signals, and how to calibrate your own tachometer to “feel” your personal redline. Why? Because training intentionally around your redline is how you will create the most change and growth in your body. Think of it this way; if your body is fully capable of doing everything that you throw at it, then it has no reason to change. Right? It may be a little uncomfortable, a little hard, but it was able to handle it. So, to force change, to shake up your body and tell it that it needs to build more muscle, you have to push it to the point that it occasionally fails. The trick is to do this intelligently so that you don’t overdo it and end up injured or worse.

I’m going to stop right here and tell you right now that you can’t play around with discovering your redline without consulting your physician first. Plus, I highly recommend working with a trainer who can help you train appropriately, so that you don’t get injured. Ok? Ok, let’s move on.

Take a look at this chart and think about it as your ability to control how hard you exert yourself during exercise, on a scale of 0% to a theoretical 110%. The human body is always in a state of decline. We are always aging. If we do nothing but rest, we are always losing muscle and gaining body fat. Sad, but true. So, that is why I describe the lower left of low intensity exercise as a “Decline”. If you do a little bit of physical activity, you can slow the decline, but you will still decline. As you move up the curve in terms of higher intensity exercise and duration of exercise, you can achieve maintenance of your physical state and start to hit growth. But, stay at a high intensity for too long or too often and you risk injury and, yes, even death. Think I’m joking? Read up on rhabdomyolysis. Read up on the people who have died during, or right after, marathons. 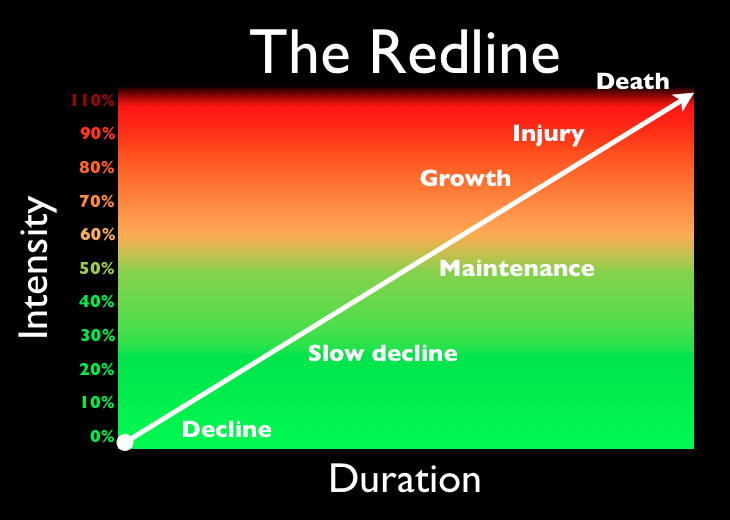 Let’s start at the low end of the scale. Unfortunately, a lot of people who do regularly exercise do so with very little intensity. They follow the “chronic cardio” plan with steady treadmill jogging, steady cycling on a stationary bike, long hours on the elliptical. Is this better than sitting on the couch? Yes, yes it is. For some people, this may be appropriate due to their current health condition. But, as I said before, staying in this zone means that you are only slowing the inevitable decline of your mortal, physical body. If you need or want to make a serious improvement in your current level of fitness or lose serious body fat, you can’t stay in this zone and train with steady-state cardio activities. You may think that you’re getting a “hard workout” because your heart is beating a little faster and you’re breaking a sweat, but that minor level of discomfort isn’t anywhere near your true redline. 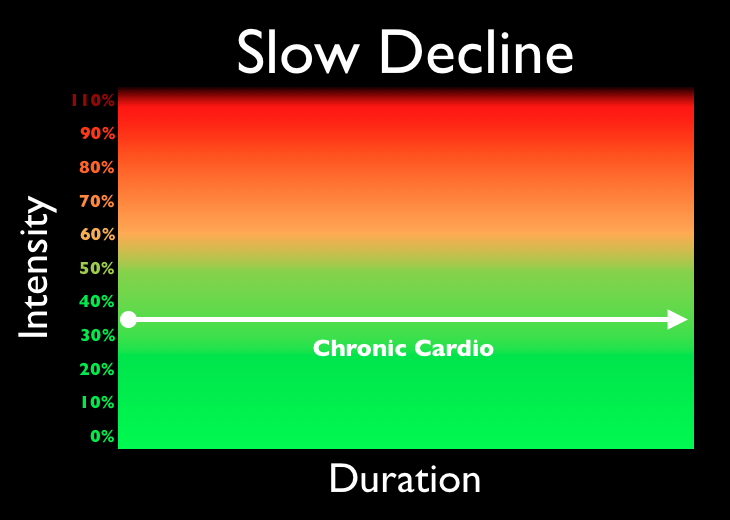 If you do start to incorporate bursts of higher-intensity into your training, then you’re doing something called “interval training” and it is surprisingly effective. Basically, this simply means that you periodically break into a higher level of intensity of whatever exercise you are doing. At this maintenance level, though, it means going from a relatively easy level of exercise to a more uncomfortable level. A good example would be walk-jog-walk-jog. At this level you are starting to play with the concept of bursting up to touch that redline, but it is happening at a much lower intensity. It is certainly better than steady-state cardio. Doing this on a regular schedule can help you maintain your current level of fitness, but it won’t result in any major changes or breakthroughs. 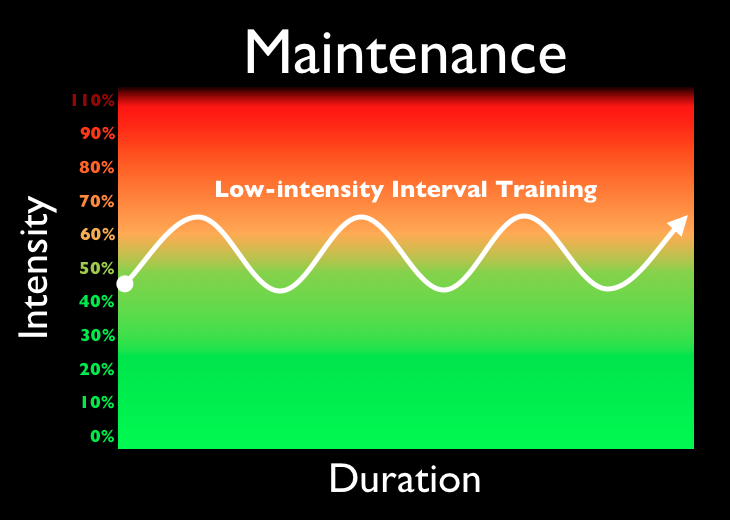 The magical place to be is here in the optimal zone of truly tapping into your redline of physical exertion, but not staying there too long, and then dipping back to a level that is still pretty intense but sustainable. You’ll notice that the spikes are more extreme. This is called high-intensity interval training, referred to as HIIT. Again, it can be applied to almost any type of exercise. It just means that you have a short period of time when you go “all out” in terms of your intensity and stay briefly in your redline zone. A Tabata method is a good example of this; 20 seconds of ultra-intense exercise followed by 10 seconds of rest, repeated continuously for 4 minutes (8 cycles). The key to success with this method is to tune into those internal signals that tell you that you are pushing yourself up to and just barely over your maximum redline. 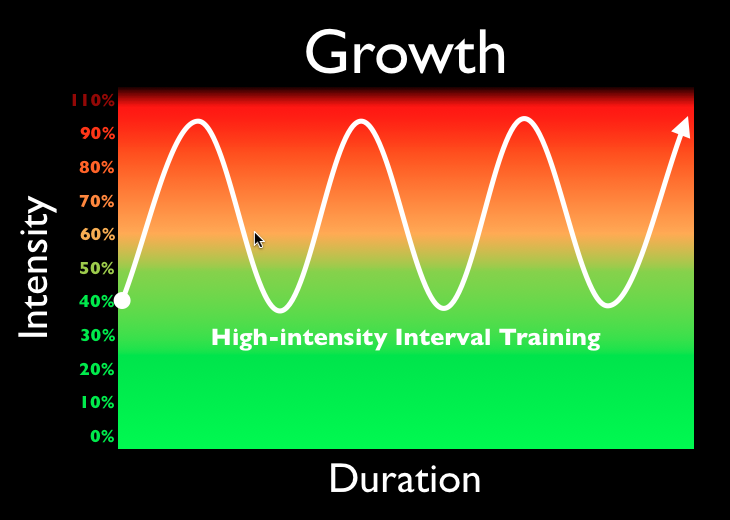 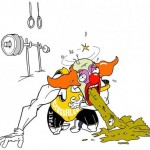 How can you recognize this redline? The more you practice doing this, the better you get at recognizing the signs. You may start to feel a little dizzy. You will probably have a really hard time catching your breath. You may even hear a roaring sound in your ears, feel nauseous, or see black spots dancing in your vision; which will tell you that you need to ease back just a little to stay on the positive side of that redline. In my opinion, you don’t want to stay too long in that zone or push past it. I don’t think that it is some “badge of courage” to have spent time with the infamous “Pukie the Clown” that some CrossFitters love to talk about.

Finally, let’s talk about the risks of staying too long at redline (or beyond). Again, CrossFit often gets a bad reputation because people think that it is a sign of being really badass to push yourself so hard that you fall down, pass out, vomit, etc. Personally, I think that it is just stupid. It risks injury (or worse) and there is nothing badass about being sidelined for weeks or months with an injury that takes you out of your regular training. Overtraining can also happen on a more macro level when you train with intensity week after week, but never take a deload week for recovery. Your body eventually just starts to break down and never has time for proper CNS recovery, muscle growth, and repair. Smart athletes know how to tap into their redline to force growth, but dial back on the intensity to allow time for that growth to actually happen. 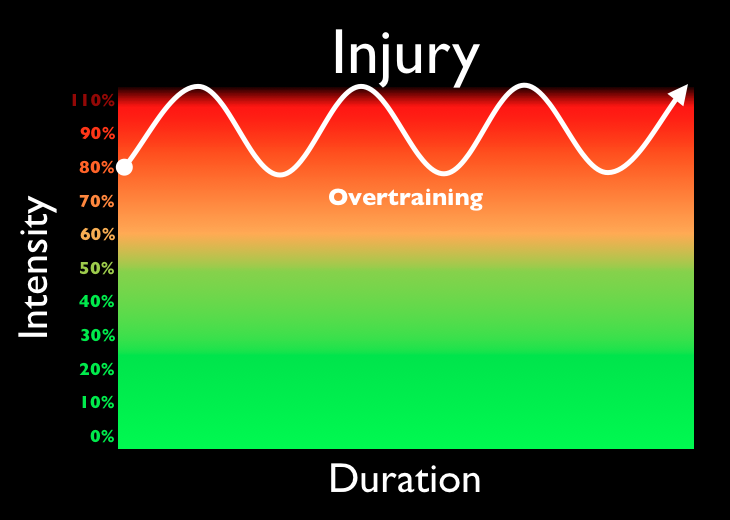 In all, I would say that it took me over a year of serious training to really get dialed into recognizing my personal redline. I still remember the workout when I really felt it for the first time, and then was able to throttle back just a hair under that redline to push myself hard and have one of my best workouts ever. I used bursts of intensity during the actual workout for micro-periods of intensity and recovery, which yielded a much more optimal workout and better performance than if I had tried to go all out and burn out. So, with all of my previous caveats about doing what is best for your health and what your physician recommends, I suggest that you explore your own personal redline in your training. Find where it is and learn how to use it to push for positive change and growth. Good luck!